Last year I did plenty of great climbing and went on some very enjoyable trips, but I was rather left with the feeling that I had lacked a little bit of adventure in my activities. Whilst I very much enjoy pushing myself physically, the more adventurous types of climbing add a little bit of spice which I can’t do without.

So when Ramon Marin asked me whether I would be interested on going on a trad climbing mission I was very keen. We picked our dates specifically to maximise the potential for good conditions in Scotland: late May to early June would hopefully have that potent combination of long days, stable weather and few midges. Fortunately for us the stars did indeed align and I’ve just returned from two weeks of stunning adventure climbing on the Outer Hebridean island of Lewis and Harris (it’s one island, but the northern part is called Lewis and the southern part is called Harris).

After a long drive up to Ullapool and a 2 and a half hour ferry crossing to Stornoway we headed to Dalbeg and parked the van right next to a beautiful beach. The next day we ticked off Neptune E3 5c and Limpet Crack E3 5c (I pumped out and fell off on my first go, but it went ground up on the next attempt). We were also visited by a pod of dolphins which was pretty special. 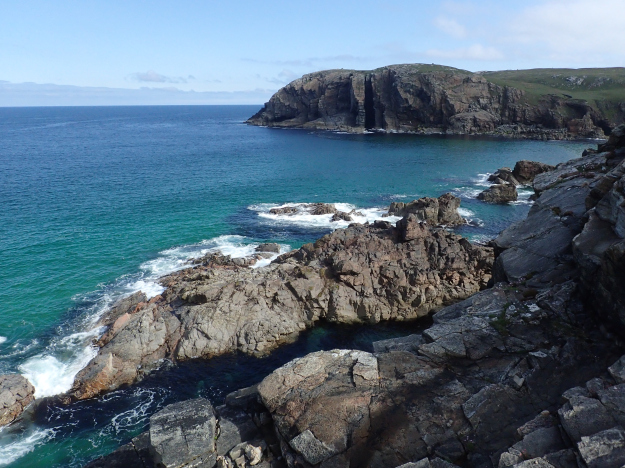 Looking over to Dalbeg Buttress, which is the left-facing wall above the slab

Next we headed down to to Uig area which has lots of good crags in close proximity. Our particular motivation was the 4-pitch E4 5c, The Prozac Link at Mangersta. This route featured on the front cover of our guidebook so we knew it was one we had to do. 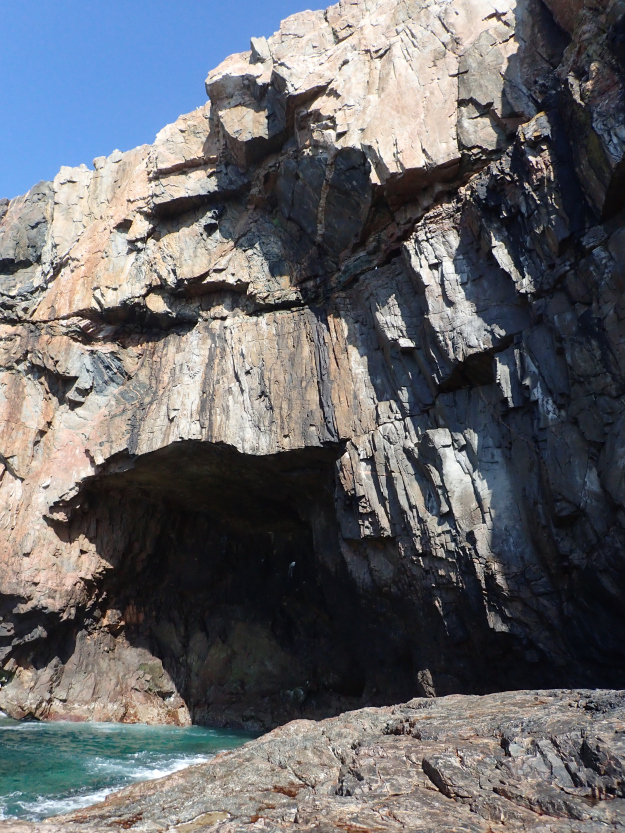 When we first walked down to the cliff and peered round the corner my stomach lurched a little. This thing was absolutely massive, and there would be little chance to bail after the first pitch as an abseil, if our ropes reached, would just land us in the sea. It didn’t help that the cliff was in the shade when we first arrived which made the whole place seem much more foreboding.

We chilled out for a bit and waited for the sun the come around to burn off any grease. Gradually the crag seemed to soften its gaze and become less terrifying, and in actual fact I needn’t have worried. As ever, things are easier when broken down into steps, and it turns out the climbing is quite soft for E4. I think it gets the grade due to the commitment factor more than anything. The first pitch is probably the best and features a lovely granitic crack, although it was a little greasy towards the bottom. 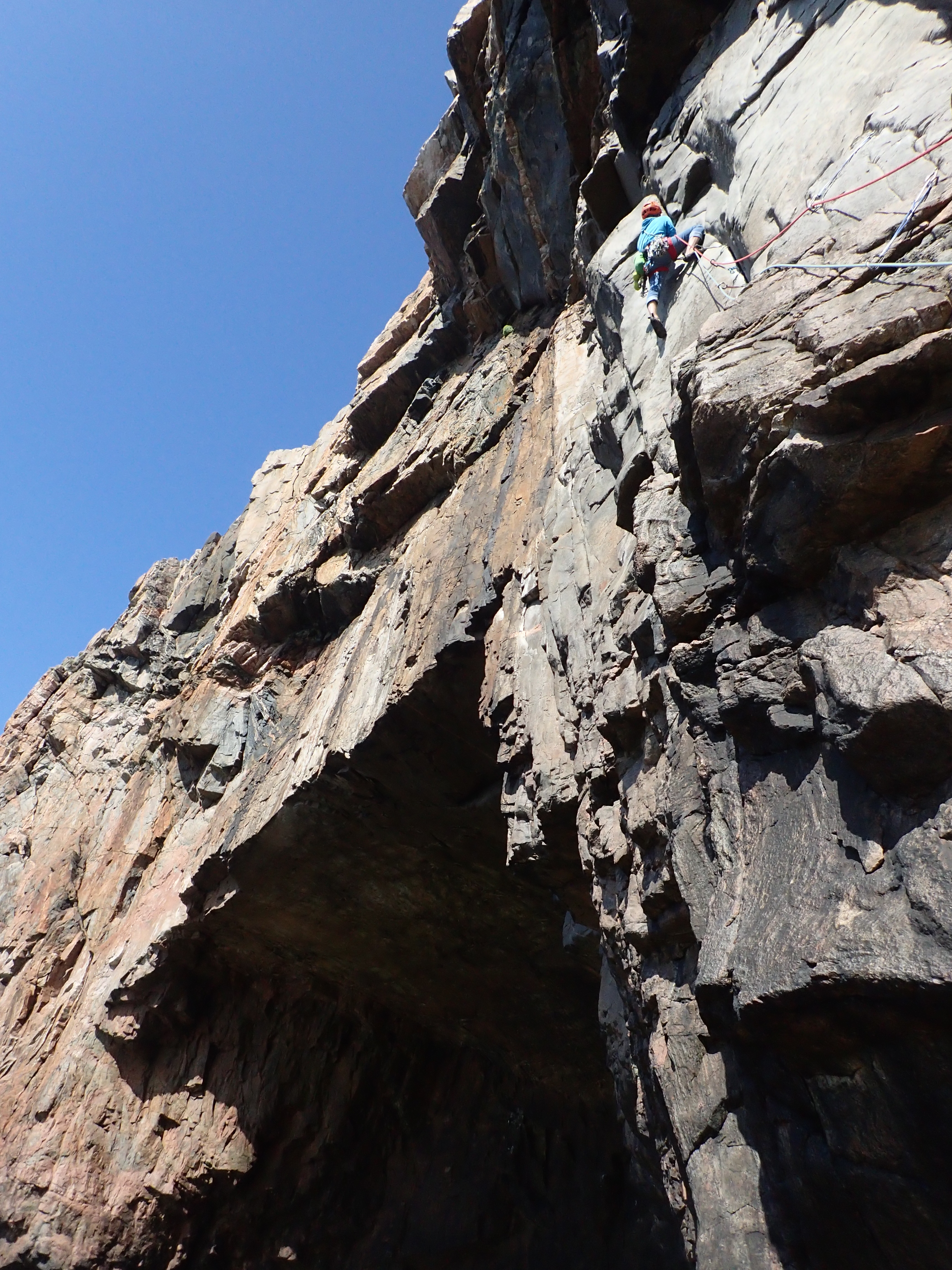 Ramon dispatching the first 5c pitch. This crack was probably the best bit. 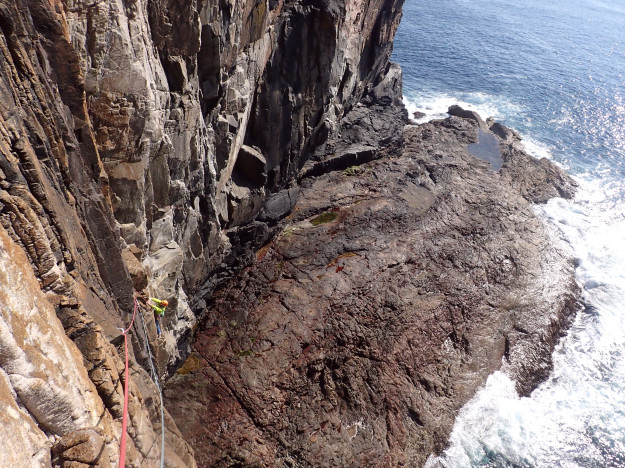 Next day we were keen for pushing a little harder on some single pitch climbs so we headed to a crag called The Painted Wall, where I did (wait for it) The Painted Wall E4 5c, following a lovely pink pegamatite band. I’d never heard of pegamatite before, but it’s super solid and fun to climb, though gear can be tricky.

Ramon then stepped it up a notch with Dauntless E5 6a, and then it was my turn to climb again. I had come away on this trip with the definite intention of doing my first E5, and it seemed like now was as good a time as any to try one. However, the best-looking line featured British 6b moves, which seemed like quite a challenge. I’m fairly sure I’d never tried any 6b moves on a trad climb before.

Faced with the conundrum of a great-looking E5 6b or a slightly inferior E5 6a, which crossed the route I’d already done, I decided to follow my heart and go for the great line. It didn’t matter if I failed, at least I’d learn something in the process. I’m so glad I did, because I gave that route everything I had, coming within a whisker of falling in several places but somehow just managing to stay with it. Elated, I gave Ramon a belay as he finished up with Pink and Black E4 5c. 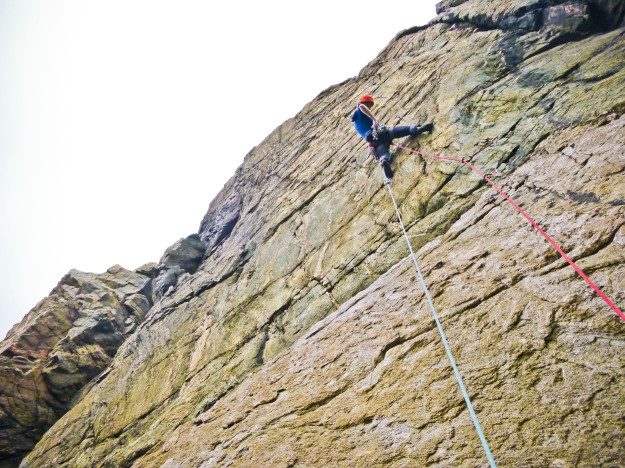 Me on Goodbye Ruby Tuesday E5 6b 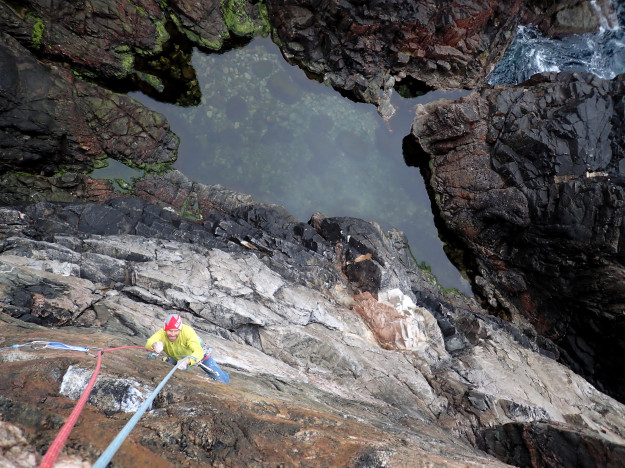 After a rest day we headed to another nearby crag, the Magic Geo. After following Ramon up the excellent Am Burach E4 6a, I decided to try another E5, The Magician E5 6a. This was a totally different experience which I’ve already written about: the route proved long, loose and very pumpy at the top. After I’d fallen twice I felt totally battered and we bailed.

The next day we tried to climb but actually failed to find the crag! The guidebook directions didn’t work for us and we didn’t have an OS map which would have provided some clarity. This turned out to be a blessing in disguise, since I was still feeling depleted from the day before, and we had our sights on a bigger objective: Stone E5 6a at Sron Ulladale. 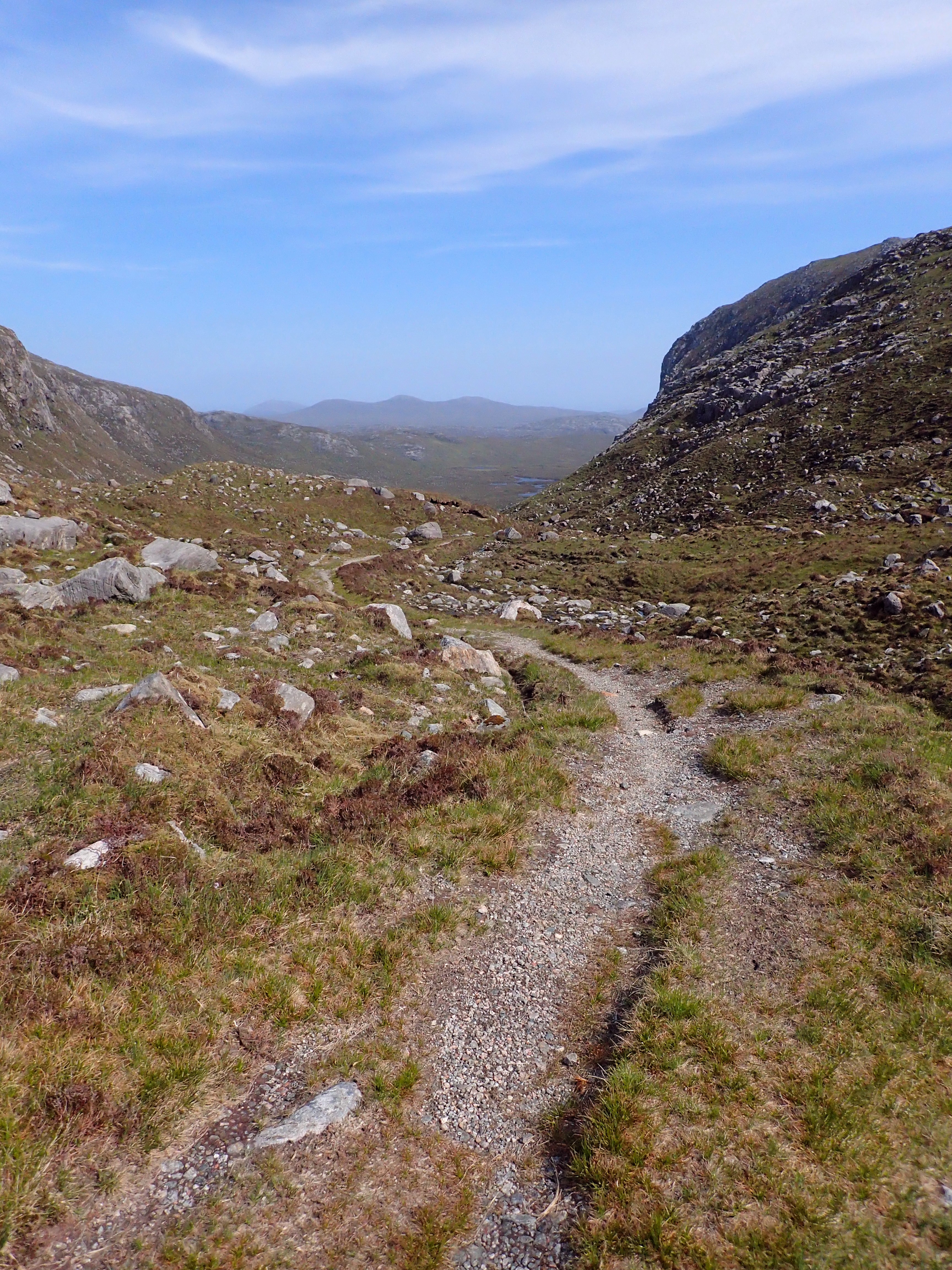 Walking in to Sron Ulladale

Sron Ulladale is a big, adventurous crag which requires at least 2 hours for the walk in and another 2 for the walk out. Our chosen route had 7 pitches, although some of them were quite straightforward (but still take time). Of the harder pitches, there was a 5c which I’d lead and a 6a which Ramon would lead. 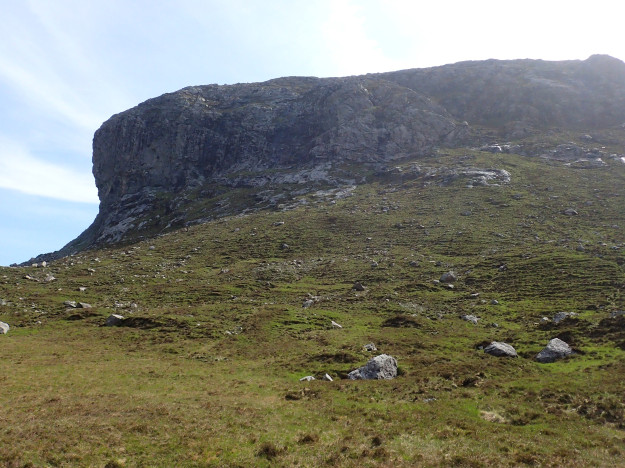 We got up at 8 AM, got ready, walked in, got on the route and made it to the crux pitch easily enough. It was a massive 40 metre corner, which we thought looked OK, but oh how wrong we were! Ramon went up and put in a strong effort, but a route-finding error (the guidebook description was a bit confusing) unfortunately saw him back at the belay. Next go he did it clean, and I followed up. Even on second, I couldn’t believe how hard this thing was. Despite my confidence at the belay, the crack was way more steep and strenuous than I had realised. It was also wet and dirty in places, and didn’t really let up at any point. Eventually I power-screamed my way onto the next belay ledge and we finished up the easier pitches above. Ramon said that he was close to giving up at points and would have passed the baton to me, but I’m glad it didn’t come to that – I really don’t know if I could have done it! A really impressive lead. 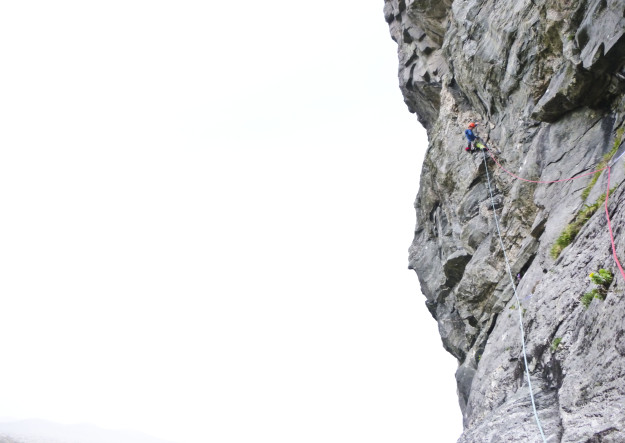 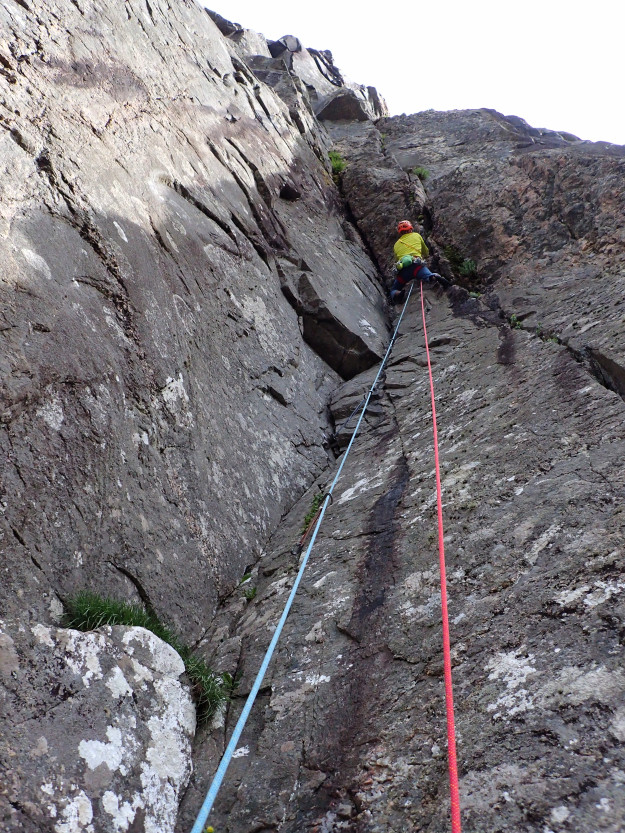 Ramon on the crux 6a pitch of Stone 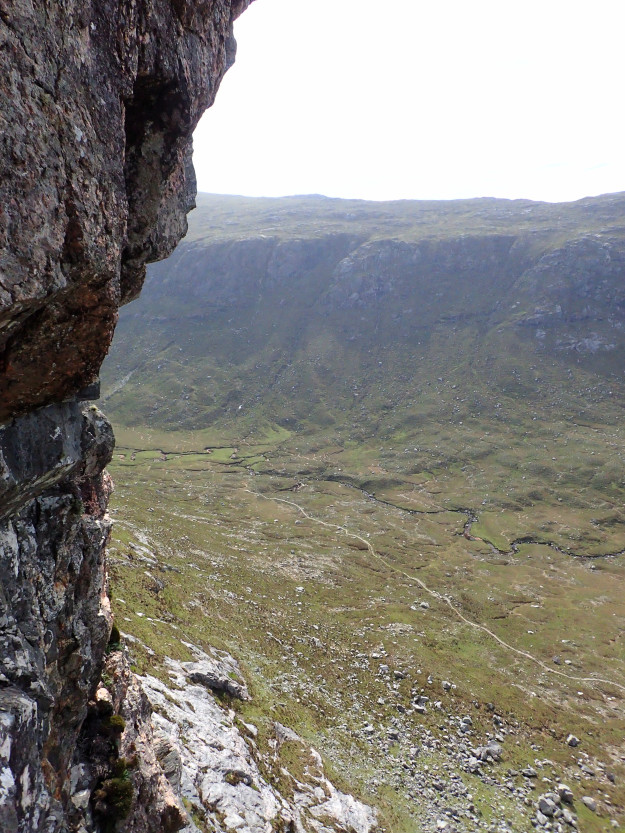 A belay with a view!

We finished the route and got back to the base for about 10 PM (sun still shining this far north). We then walked out, had dinner, and got to bed for about 1.30 AM. A very long day out! 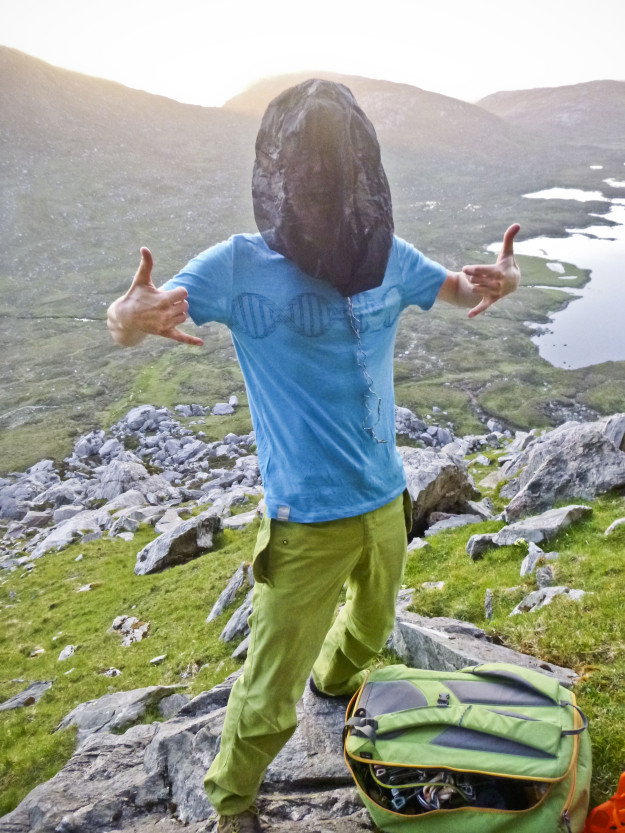 Captain, bring up the midge defences

After resting up we headed back to Mangersta for some of the single pitch objectives there: we both lead Killer Fingers E5 6a, and then I did Suffering Bastard E4 6a, a sustained crack climb which I probably found harder than the E5 actually. 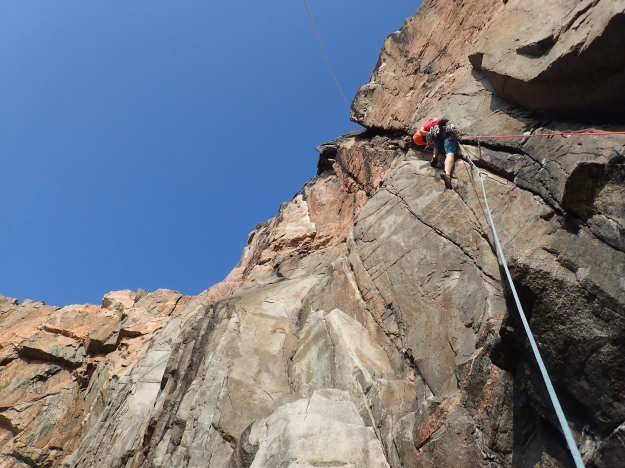 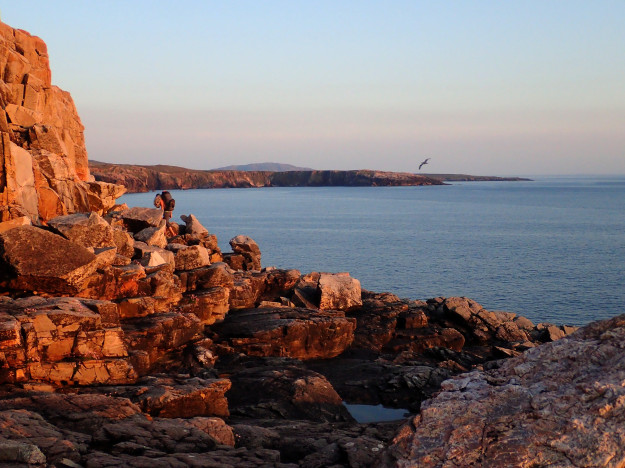 Walking out at Mangersta

The next day Ramon did Tidal Rave E4 6a at Aird Fenish – a lovely route but unfortunately done in pretty greasy conditions. I tried Wave Dancing E4 6a but bailed half way up when I realised my arms were completely blasted.

Next we headed back to Dalbeg to look at a couple of highly-rated long E5s in the area. Ramon got on Blessed Are The Weak E5 6a, but wasn’t feeling it and decided to back off (the gear wasn’t great). I then went to attempt The Storm E5 6a, which is a full 50 metres long. 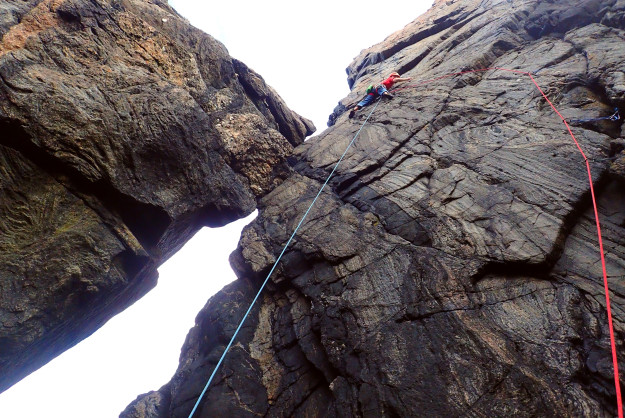 Ramon on Blessed Are The Weak E5 6a

The Storm starts up a steep crack, and unfortunately I pumped out about 15 metres up. Fortunately Ramon encouraged me to lower off and have a ground-up go. I’m really glad I did. After looking at the route quite a bit from the ground, on my next go I found a bomber knee bar just below my high point. From this I was able to blast up through the hard section above and get to a hidden jug. 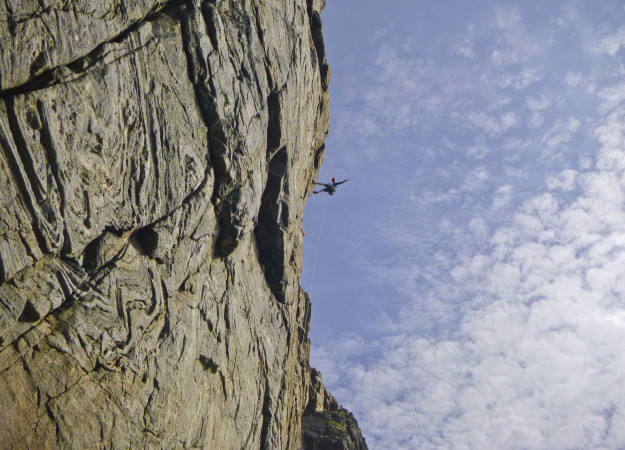 Abseiling into The Storm E5 6a. Amazing patterns on the rock eh? The route starts up the crack in the top left corner of this photo.

But I wasn’t even half way at this point. I think I must have been on the route at least 2 if not 3 hours, climbing through some fiddly gear and really scary run outs. A blessing in disguise – if there had been more gear I’d have placed it all and had none left by the top! It really seemed to go on forever; 50 metres is a long way. At one point I was convinced I could see foliage poking over the top, only to move up and discover another 10 metres or so above me. Eventually I got onto easy but very loose terrain, about 4 metres from the top and was experiencing some mega rope drag. I looked down to Ramon who yelled something about the red rope, which my exhausted mind thought to mean that I was nearly out of rope. So I tied in to the abseil line and belayed from there. When Ramon arrived, it emerged that he was trying to tell me my red rope was caught on a spike, thus causing all that drag. 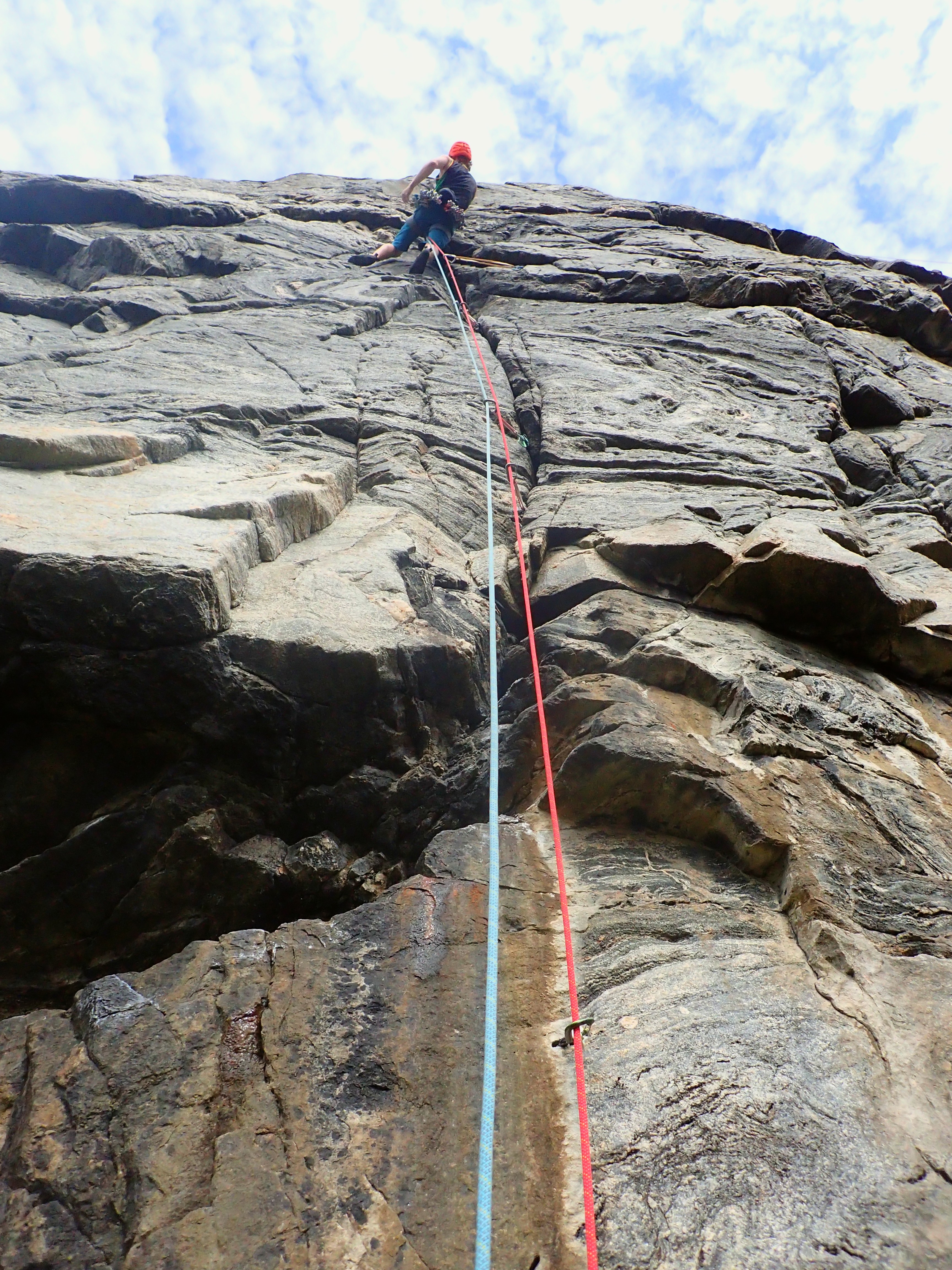 Grappling with the steep crack at the start of The Storm

The Storm was a real effort and a real adventure, surely one of the most intense climbing experiences of my life. This is what I love about trad climbing: I have yet to find a better way to reliably have a really memorable day out.

For our last day we opted for a gentler outing, ticking off a bunch of classics at Creag Liam on Bernera island.

A rest day swim, fortunately the beach wasn’t too busy

This is the first time I’ve climbed in Scotland. It’s certainly an effort to come somewhere like this. You endure a long drive, take risks with the weather and meet plenty of bastard midges (although we were mostly fairly lucky, since there was often a breeze). But the effort is worth it. The climbing is world-class, and the stunning raw beauty of Lewis and Harris felt really special. As well as midges, we saw eagles, seals, dolphins, herons and countless sea birds. We swam in turquoise waters next to deserted golden beaches (thanks for lending your wetsuit, Ramon) and even managed to get sunburnt!

Totally epic. Scotland, I’ll be back!