Four years ago, when I first visited Australia with my partner Emily (who is from Melbourne), we spent a week in Tasmania at her family’s holiday home in Oyster Cove, about 30 minutes south of Hobart. 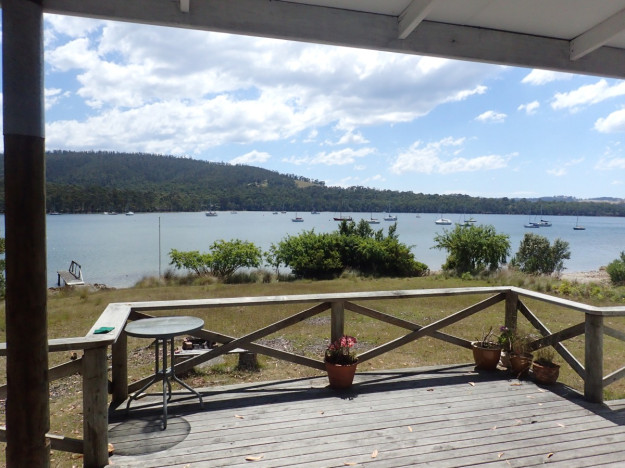 Looking out from the lovely holiday home at Oyster Cove

Before we went across on the ferry, her dad, Rod, lent me a book to read: The Totem Pole by Paul Pritchard. I’d never heard of Paul Pritchard or The Totem Pole at the time, but Paul was a key member of the 80’s climbing scene in Llanberis (where I live now). In 1998 he came on a trip to Tasmania and planned to climb The Totem Pole which is a unique tower of dolerite, 65 metres high, about 4 metres wide, jutting out of the sea just off the western coast of the Tasman Peninsula. An abseiling accident caused a loose block to give him a life-threatening head injury and the book tells the tale of his injury, rescue and subsequent recovery (although he is now not able to move one side of his body).

It was with impeccable timing that Paul visited North Wales about a week before I came out to Australia, showing a film and giving a lecture about his accident and successful attempt, last April, to reclimb the pole. He has a wonderfully positive outlook on his accident and how it changed him for the better. (Read this interview, it’s brilliant.)

On that visit we didn’t do any climbing, but the book motivated us to go on a boat trip along that section of coast line. While the rest of the tourists marvelled at seals I looked up at “The Tote” and thought to myself: one day. 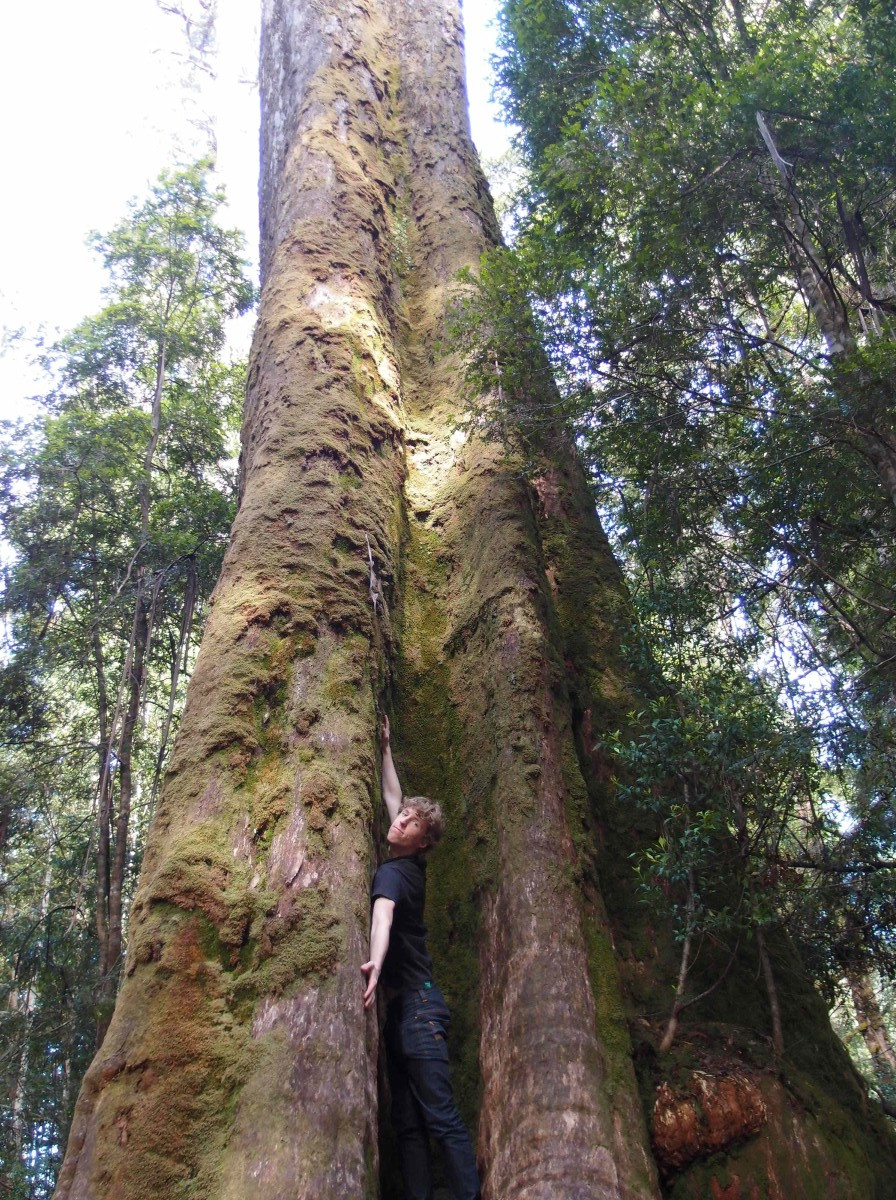 This past March, Rod sadly and suddenly died, so it has been a difficult year for Emily and her mum, Mandy. We came back to Australia for christmas to be with Mandy but I have also been able to fit in some climbing as well. My top agenda item was of course the Tote. It seems fitting that we are here primarily due to Rod’s death, and it was he who introduced me to the Tote in the first place. 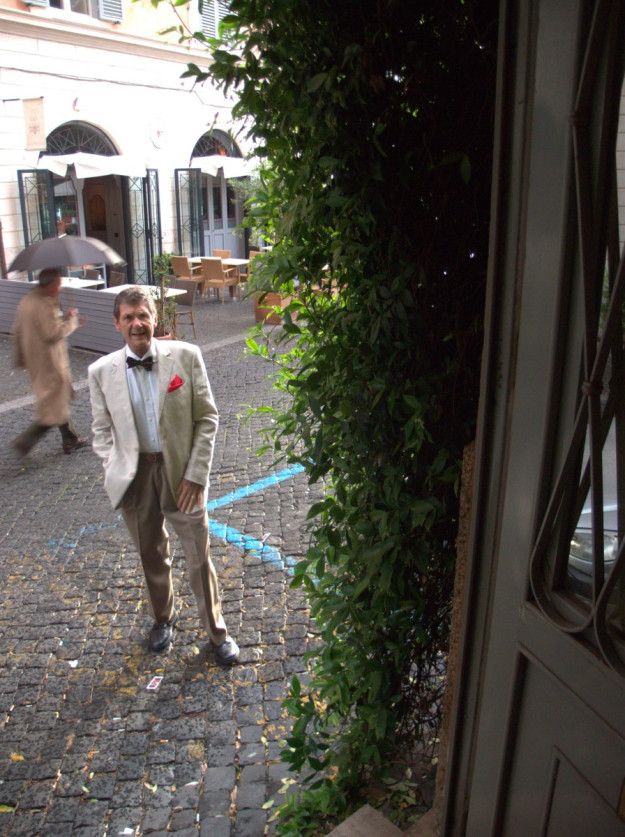 I was a bit worried about how to find a suitable climbing partner in Tasmania, but everything came together. I got in touch with Rob Greenwood who was also planning a trip at this time, and he told me to talk to another Brit, Jim Hulbert, who has been on a working holiday for nine months, sampling the best climbing spots across Australia. Jim was already planning to come to Tasmania the day before me, so we agreed to partner up. 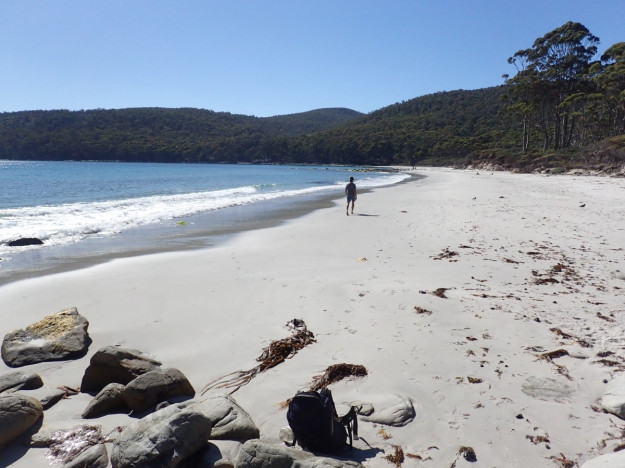 After a couple of days warming up at The Organ Pipes above Hobart, we took a rest day and then headed for the beautiful Fortescue Bay, where the hour and a half long walk-in to Cape Hauy begins. After descending through bush until we were about level with the top of the pole, we found abseil bolts and fixed a rope. 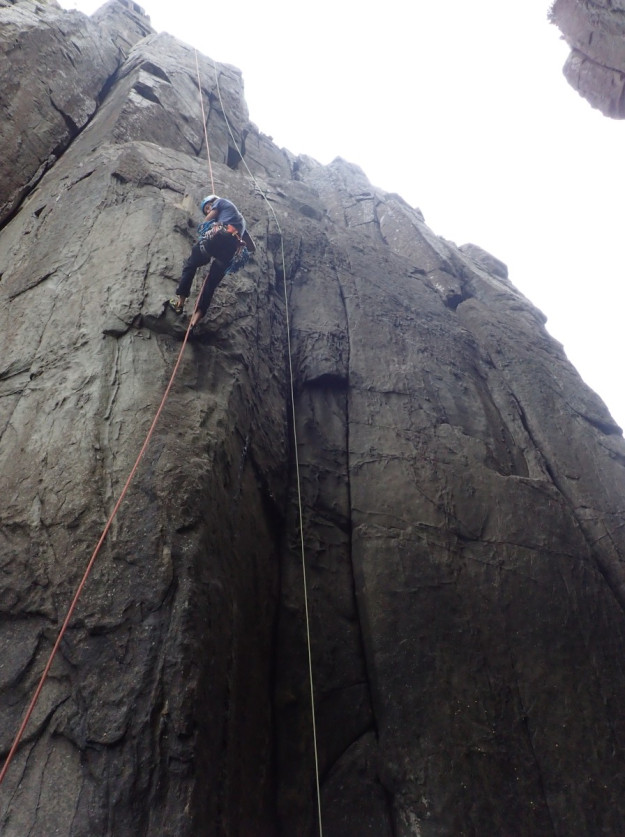 Jim descending down the mainland cliff

I was first down and faced the slightly tricky task of swinging on the ab rope about 4m out from the mainland in order to get onto the starting belay on the Tote. The rock was greasy and there’s not a lot to grab, but after a few tries I managed to do it, hooking my index finger through a bolt hanger before quickly clipping in. 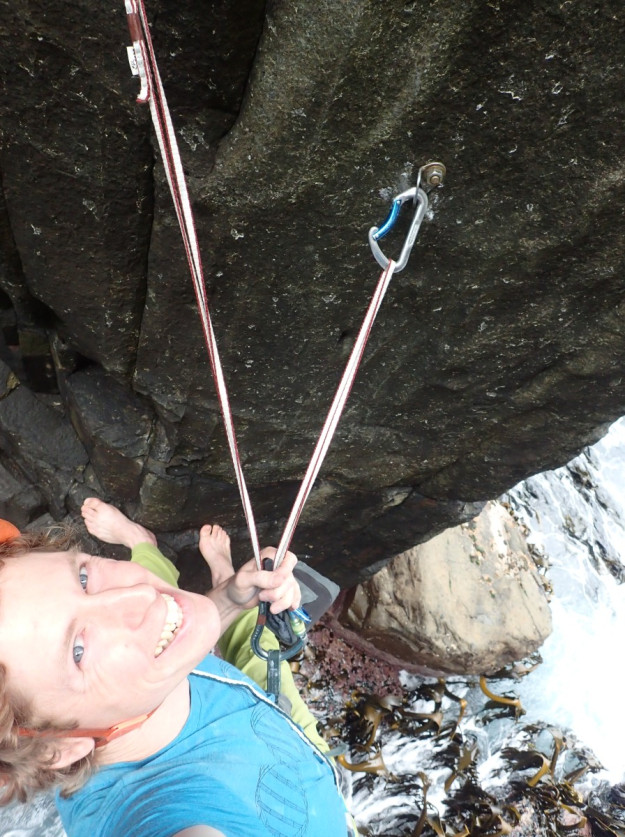 Hanging belay at the bottom of the Tote 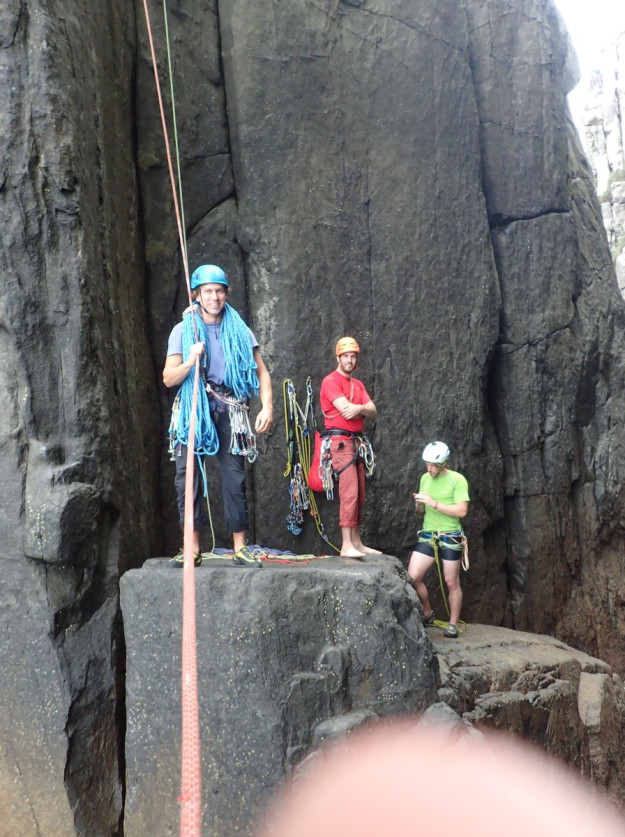 About to pull Jim across onto the Tote (the chaps behind are gearing up for an icy swim to the start of the Candlestick, which is another sea stack behind the Tote) 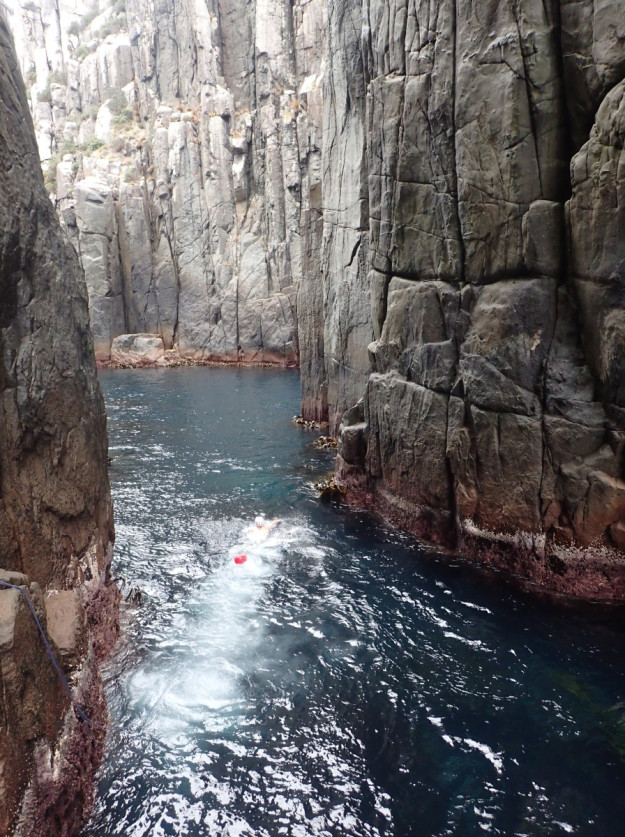 Aforementioned icy swim in progress (he didn’t hang about)

We immediately regretted our optimistic clothing choices as it’s quite dingy down there and the wind comes howling through the channel. Jim set off on pitch 1 of the Deep Play route, which climbs 20m to a ledge at grade 24 (about French 7a). After a good fight, Jim unfortunately popped off on the onsight. We decided to lower back to the start and he had a couple more goes at redpointing the pitch, but didn’t quite manage as there wasn’t much time for him to rest between attempts and I was getting increasingly chilly. So we decided to press on. (Jim plans to return for another go later in his trip.) 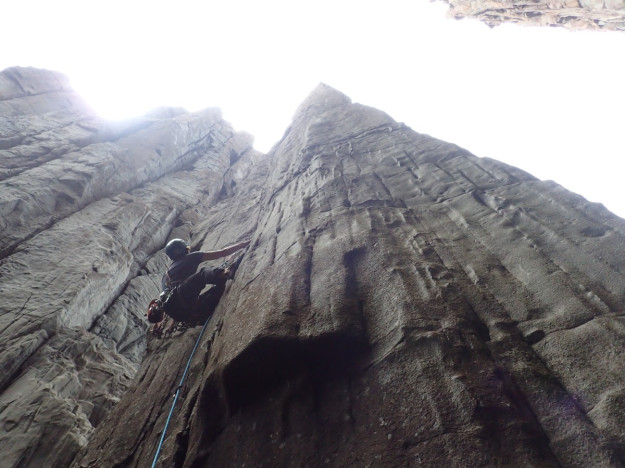 Now it was my turn: the Deep Play route joins the original Free Route for its second pitch, a 40m grade 25 (about French 7a+). This pitch was superb and we were far enough above the water now that there was no greasiness. The climbing mostly involved short harder sections between pretty good shake outs, although there was quite a bit of chalk on route which no doubt made the onsight easier. Despite notionally following an arete, most of the moves were actually face climbing with occassional use of the arete for hand holds. 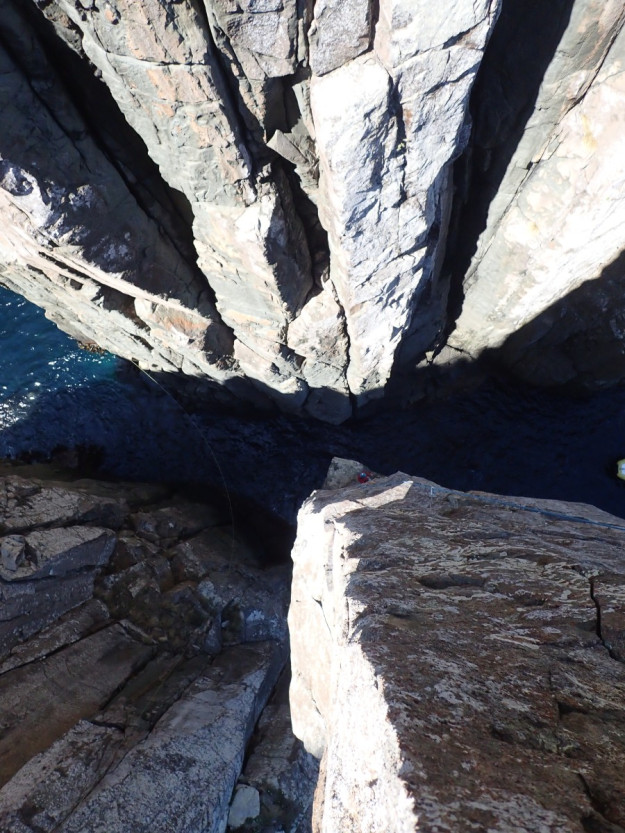 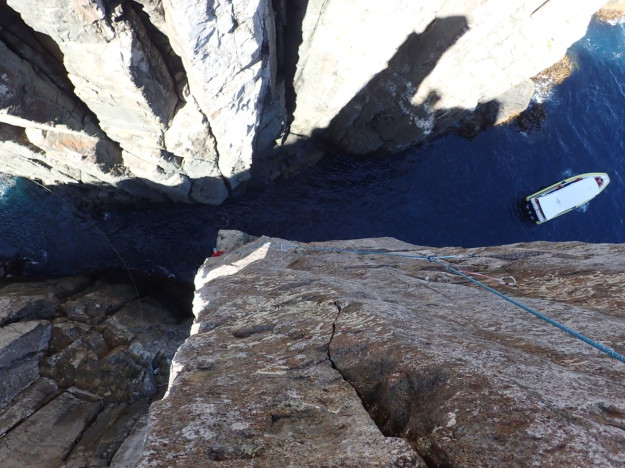 We had tourist boats gawping at us all day! Note the shadow of the Tote projected onto the side of the Candlestick.

Jim then lead us up the final 5m so we could stand on top of the huge block which perches on the summit of the pole. 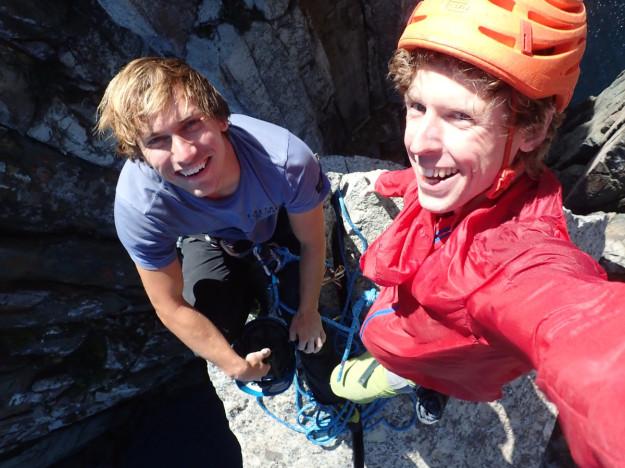 Summit selfie, trying not to wobble off! (It’s quite small and not very flat)

All that remained was to get off: we’d been trailing the rope we’d abseiled on behind us, and we needed to use this to rig a tyrolean traverse, something neither of us had done before but reckoned we could figure out! 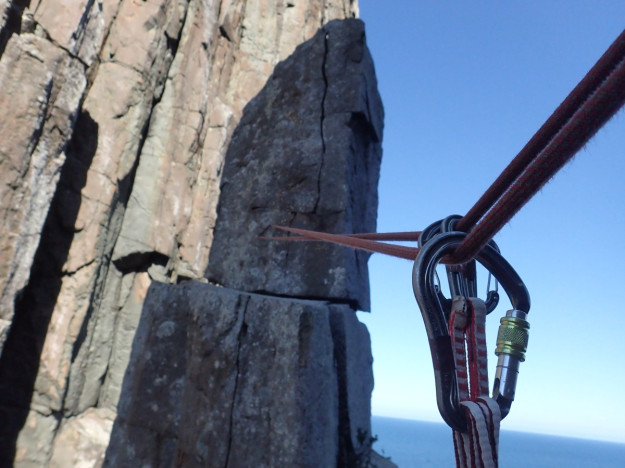 On the Tyrolean traverse (you can see we have threaded the bolts, ready to pull the rope through)

I’d read that this was a mixed route with both bolts and trad gear required. In fact it was probably about 80/20 bolts/gear, and all of the harder moves were protected with bolts. We placed a few bits of gear: 1 wire and some small cams. Frankly I don’t really understand this bolting ethic; it felt like it was practically a sport route and I think that if you’re going to place that many bolts you may as well just bolt the whole thing and be done with it. Or leave the bolts out except where absolutely essential. (Doing the whole thing on trad gear would undoubtedly be a much more serious proposition.) 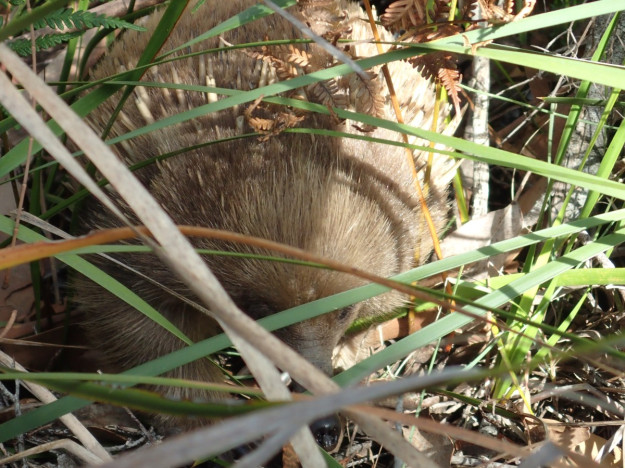 Cute echidna spotted on the walk out

Anyway, rant over, it was a fantastic day out in a beautiful place, and a major item ticked off the bucket list!