I’ve just returned from a trip to Valencian climbing destination Chulilla. It’s not somewhere I had heard of six months ago, and certainly isn’t one of the big sport climbing areas that you often hear of people heading to. But when I was chatting to my friend Glyn some months ago he proposed it, and the climbing looked good, so we set the wheels in motion.

Chulilla gorge and town – the refuge sits on top of the cliff on the left. Photo by Glyn Hudson

More recently it seems like Chulilla has been getting a bit of attention from the UK climbing community, and deservedly so in my opinion as it has some fantastic climbing. However there is still a lack of good information on the internet (at least in English) so this blog post will also function as a mini-guide giving some tips to those who are thinking of planning a trip. 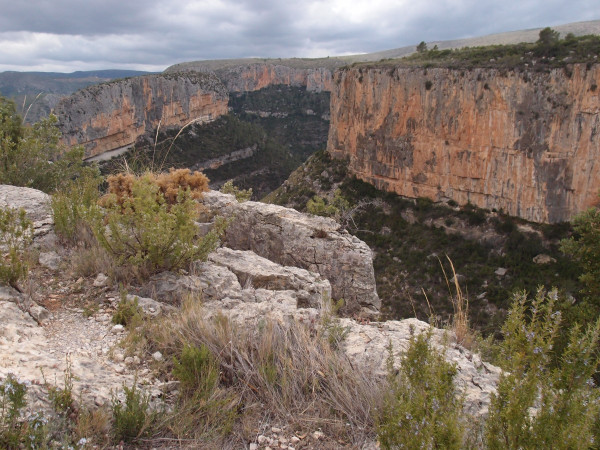 View from the refuge

Chulilla is a small town situated at around 400m, about 1 hour’s drive from the coastal Spanish city of Valencia. It hosts a vast, orange-coloured limestone gorge, much of which is bolted.

The walls of the gorge are roughly 70m high, but not many of the routes go all the way to the top. That said, many of the routes we climbed were super-long stamina fests; an 80 metre rope is essential, as few lines are equipped with intermediate lower-offs for those on shorter ropes. 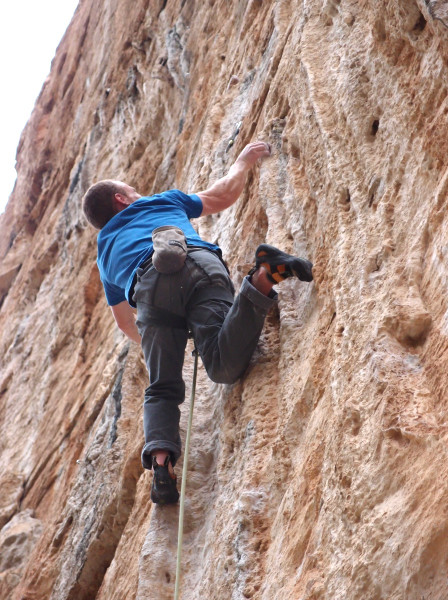 We stayed in the climber’s refuge El Altico, run by local climbers Pedro and Nuria. Pedro has been responsible for a lot of the bolting so he’s great to chat to about routes. The refuge overlooks the gorge and provides bedding and an equipped kitchen with a gas hob and fridge. If you’re feeling flush or lazy Pedro and Nuria will also serve you meals. I was lucky to have my birthday during the trip, so on that evening we gave ourselves the full-board treatment and enjoyed a tasty Valencian rice dish.

There are other eating options in the town, although be aware that quite a few places are only open on weekends. On our last night we enjoyed a very tasty meal at Hostal El Pozo.

One more thing on the subject of food: the locally-grown oranges are really fucking tasty. A big step beyond what you can get in the UK. We ate a lots – I think the best ones came from the tobacconist in the square. 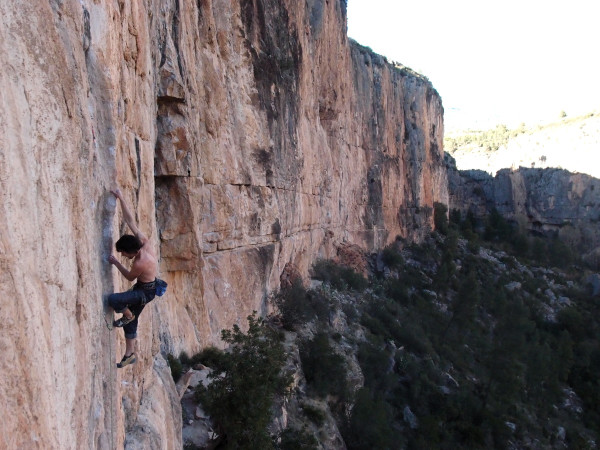 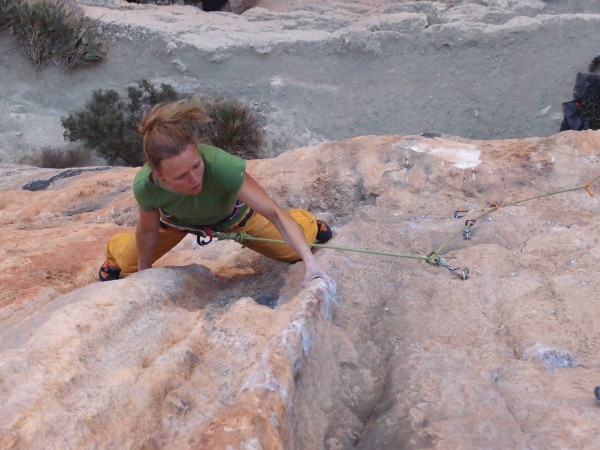 From the refuge it’s possible to walk to all of the good climbing, although having a car in our group was pretty useful for getting in/out of the village, supermarket runs, etc. A car will also reduce your walk-in time for some of the crags. There are also some other crags (not in the gorge) with routes in the low 6es which were visited by some of our group and require a car.

Chulilla has a lot to offer in the mid to high 7s. There were two areas we found ourselves going back to again and again. The first is Pared de la Enfrente which is directly opposite the refuge (although it takes a little time to get down to as the refuge sits on top of the cliff). The second is the El Embalse area which includes El Oasis, El Balconcito and others; this is a bit further away around a bend in the river, but it’s where we spent the most time and is absolutely worth the effort to go to. 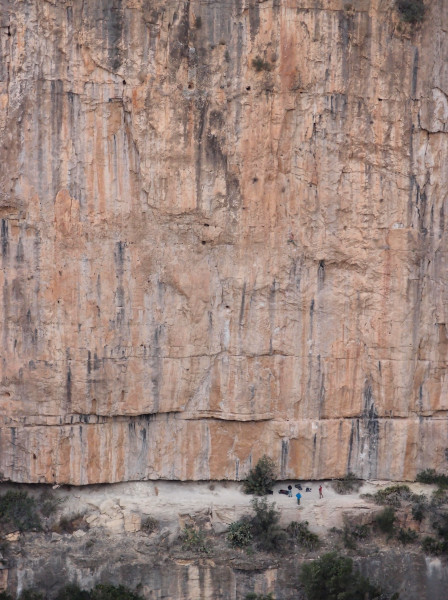 I wouldn’t say that there is a definitive style to the climbs in Chulilla; there is quite a lot of variation other than the fact that most routes are pretty long (often 30 to 40 metres). You’ll find both steep tufa climbing and delicate crimping – sometimes even on the same route!

We found that the grading was often a bit soft compared to other areas we’ve been to, but this could be in part due to the length of the routes. But there were quite a few routes where we disagreed with the grade reported in the guidebook. 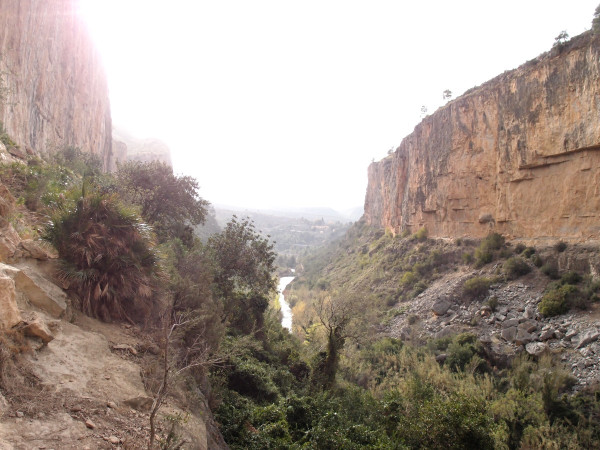 View towards the reservoir from El Balconcito

Some highlights for me were:

This is an obvious diagonal crack which goes to the top of the gorge. In the guidebook it is 2 pitches of 6c + 7a, but we didn’t think the second pitch was significantly harder than the first. We climbed it as an epic 70m single pitch (massive rope drag by the end) but you can’t abseil off without ending up hanging out from the wall. So Glyn had to climb it again on second to strip the draws. We then topped out and tried to walk down by going left. This resulted in us getting pretty dehydrated whacking our way through dense bushes for a few kilometres but we eventually found a way to scramble/walk back down into the gorge. We later realised it would have been better to abseil down Orgasmatrón which is a multi-pitch 5+ just a few routes to the right. I don’t recommend our descent strategy, but our mini-epic is part of the reason that I won’t forget this route! 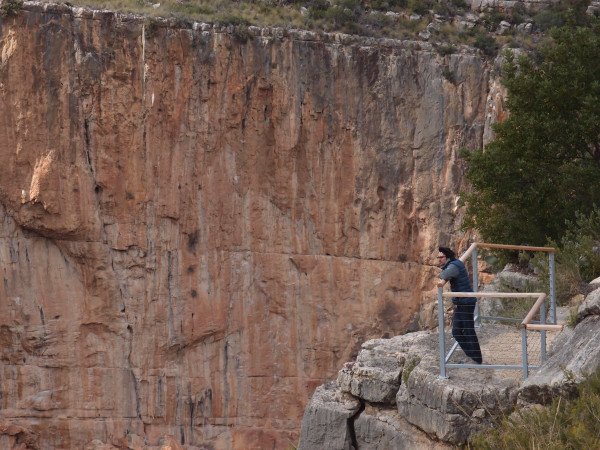 My first of the grade, this is a long route with some technical/hard moves up to a decent knee bar rest, then a sustained crux of tufa pinching up to a good jug with feet which aren’t as good as you’d like. Then a bunch more tufa climbing which isn’t hard except when you’re pumped out of your brains – which you are by this point! (I was, at least…)

On my first go, by some miracle, I almost managed the onsight. It was one of those rare situations where I was somehow able to squeeze out every last ounce of effort from myself and try really really hard. When I finally fell off just a couple of bolts from the end I felt as if I might be sick! Despite my initial near-success, actually getting the redpoint took a while and became a bit frustrating as I kept falling off the lower section which I had onsighted. In the end I got it on my last go of the second day trying, having accepted that I’d leave the clips in and try again after a rest day – I think this allowed me to relax enough to actually do it.

I was pretty pleased to manage to flash this great route. It starts off hard, then there is quite a bit of easier but sustained tufa climbing, then a fewer hard moves near the top which I somehow managed to battle through. 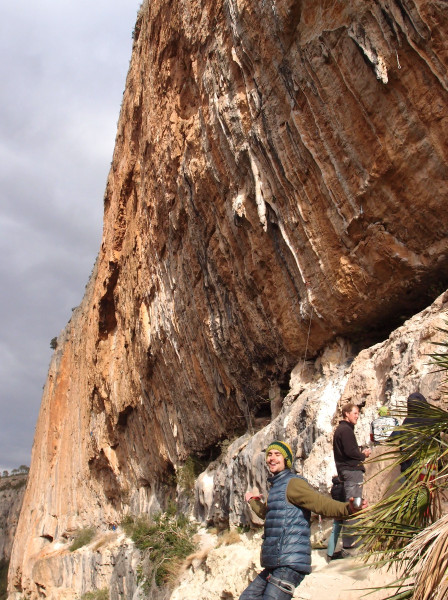 The magnificent tufas of El Balconcito (although Moon Safari is just out of the photo, on the right)

My best redpoint and most enjoyable route of the trip. I had great fun working this route, and when I did it I felt great, having just had a rest day I was fresh and everything seemed to flow really nicely. I find it super satisfying when I manage to get a redpoint by climbing well rather than just scraping through. It gets 7c+/8a in the guidebook, but I definitely don’t want my first 8a to be a soft one! I think 7c+ is fair. 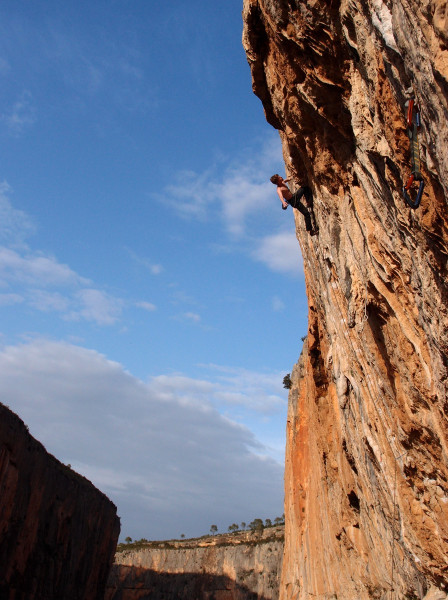 Me enjoying some late evening sun on Tequila Sunrise. I fell right at the top on this last attempt of the day, but got it first go the next day on

A fast redpoint on the day I ticked Tequila sunrise, this route had some great moves including a memorable heel hook as you move from one undercut to another.

Finally, a bit about the journey. You can of course do the predictable thing and fly to Valencia, but we took the train for a better adventure and lower carbon footprint (booked through my company Loco2 of course). 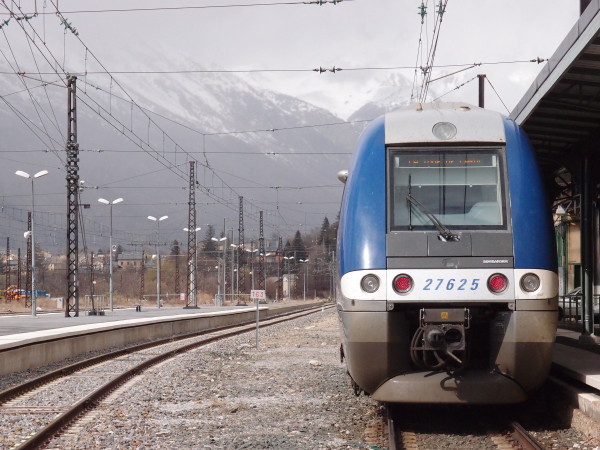 On the way out I travelled with Glyn via the uber-scenic Latour de Carol route. This consisted of a sleeper train to Toulouse (although you can get one direct to Latour de Carol for a quicker journey), and then a local train up through the Pyrenees the following morning. We soaked up the mountain scenery and upon arrival at Latour de Carol I managed to muster up enough Spanish to ask the café owner if we could leave our bags in order to go on a little walk. We went a kilometre or so to the border and then returned to reward ourselves with beer and a bite of chorizo! Another local train took us down to Barcelona where we got a connecting service to Valencia. 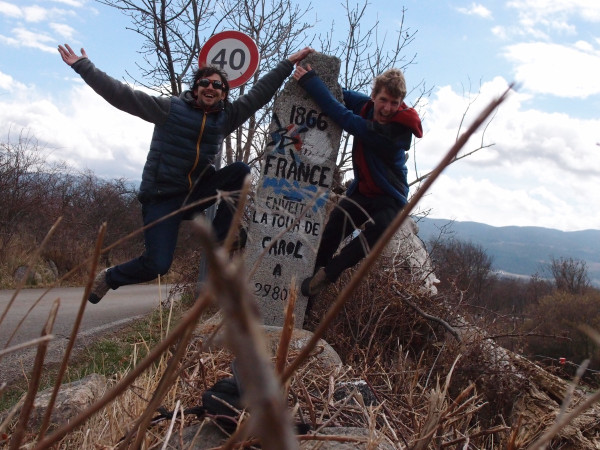 This humble stone marked the border – despite how it may look it was quite solid and we weren’t pulling it over! For some unknown reason it says “2980m” at the bottom but there’s no way we were that high up.

On the way back we were both joined by our girlfriends. We travelled to Barcelona on the Saturday arriving mid afternoon and spent a night in the city. The highlight was definitely having pinchos at the lively Gasterea bar. It’s the first time I’ve been to a “proper” tapas/pinchos place where you literally sit at the bar and iteratively pick out small snacks while getting steadily more intoxicated. (As opposed to “restaurant” tapas where you sit at a table, order once, and are waited on.) It’s a great way to eat; we experienced loads of different tasty morsels in a single evening and the place was positively buzzing. The following morning we took a high-speed TGV service direct to Paris (also fairly scenic as it turns out), and then the Eurostar got us back to St Pancras by 7.40 PM. 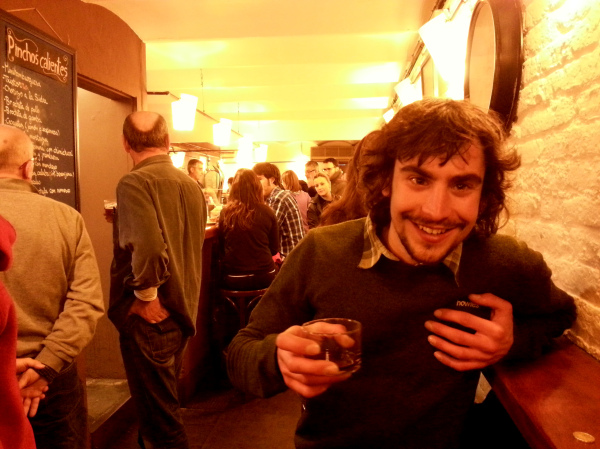 4 thoughts on “Orange rock and orange naranjas in Chulilla”