This post is a little overdue, but I’ve recently had two mini-adventures which have taken me outside my usual comfort zone of bolt clipping.

The first was a trip to Fontainebleau at Easter. I generally only boulder indoors for training, but going to Font for Easter sounded fun and we were lucky with some really good weather apart from on the Monday.

It was only my second trip to Font. On my first we had bad weather for 2 out of 3 of the days, so it felt like my first proper encounter with the famous sandstone boulders. Naturally I had fun falling off lots of things, no matter how “easy” the grade was! But my expectations of myself were low, so I enjoyed simply having a go at stuff without being too concerned about grades.

The best day was probably Sunday, when we decided to try to do as much of the Apremont Centre blue circuit as we could. I got to problem number 31, and definitely felt pretty worked as we walked back to the car!

Unfortunately Colin got a finger injury on the first day and couldn’t climb, but this did mean he took a load of good pictures: 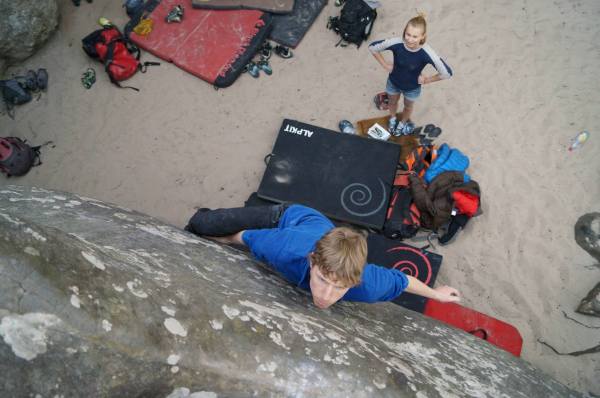 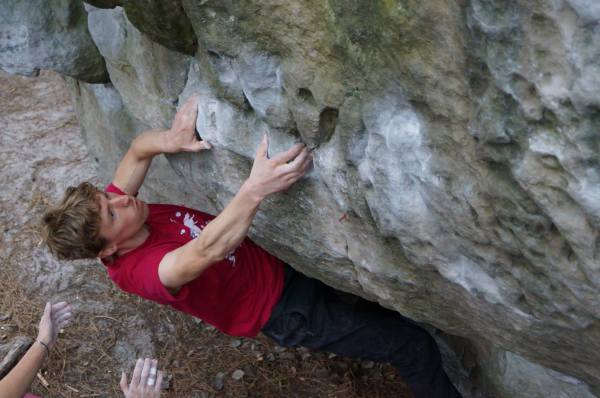 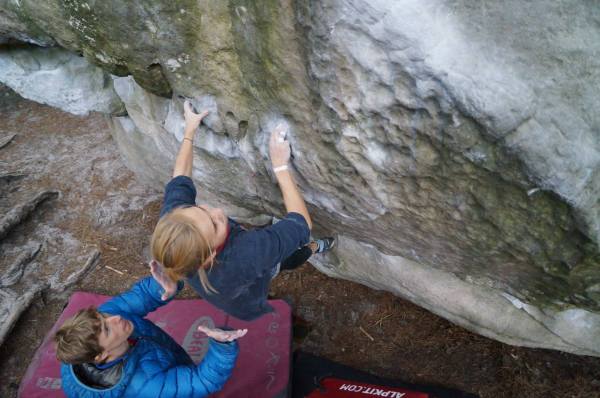 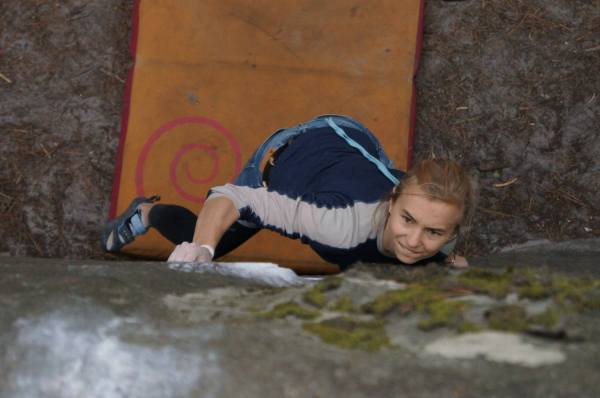 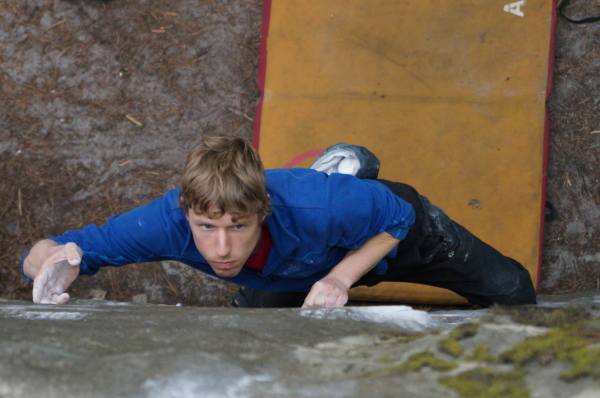 The photos above are all copyright Colin Rouse

More recently I managed to get some climbing in at the UK trad paradise of Pembroke.

This was stage one of my “try to climb more trad this year” plan and I had great fun getting scared trying to put on my trad head. 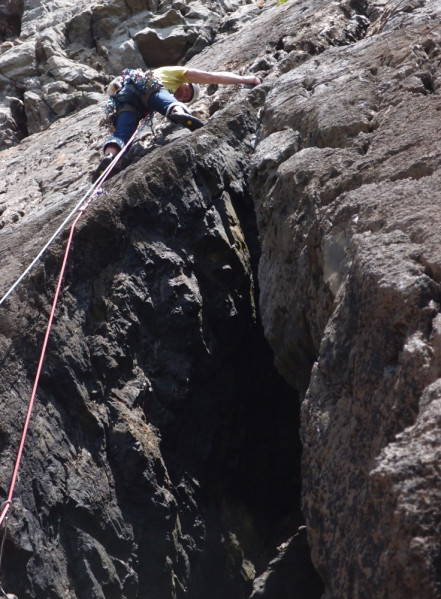 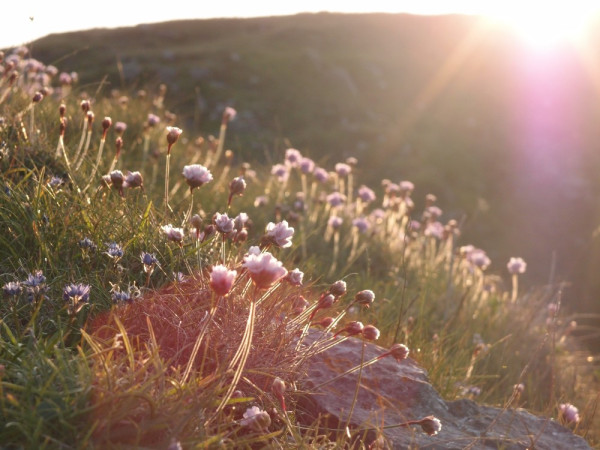 Adam managed to persuade me to try the notoriously classic and tough Pleasure Dome E3 5c, which resulted in me taking a rather spectacular wanger, certainly my biggest trad fall to date. Fortunately I had placed a bomber nut so I wasn’t in mortal danger, but I have to admit that I came off at least in part because I was scared to commit to the move and hence have to place gear from the next holds! (Still working on that trad head…) 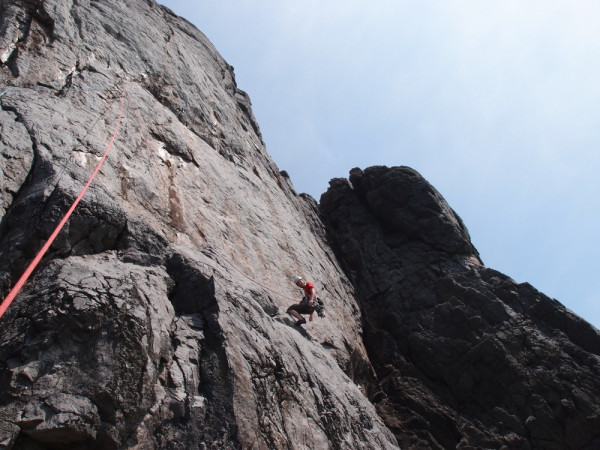 Pleased that my nut held after I fell off the crux!

Another very memorable route was the rather esoteric Preposterous Tales E2 5b. It traverses into and through a sea cave and then up through a blowhole. (Which fortunately was not blowing on the day we did it!) 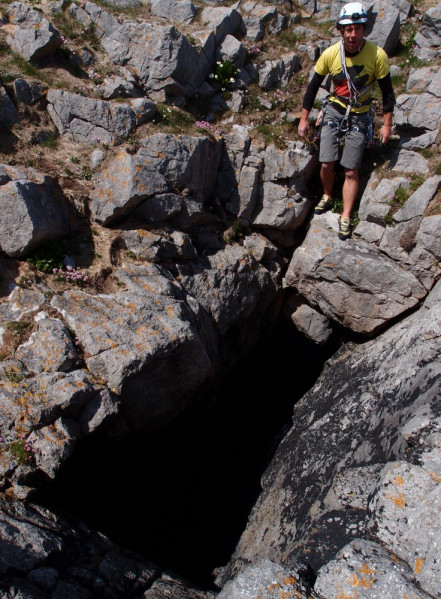 Inspecting the “top out” 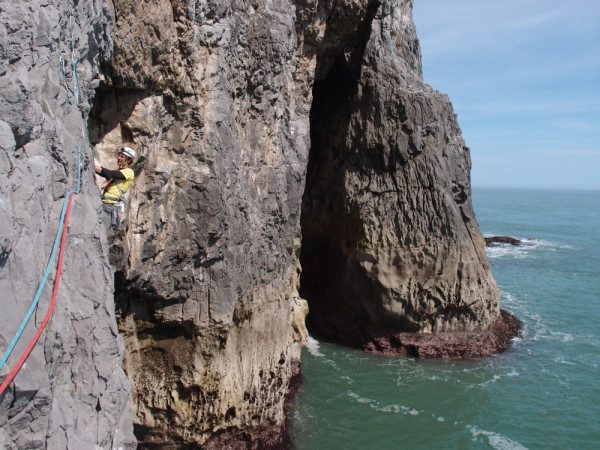 Adam enjoying the first pitch (the crux, as you enter the cave)

Most of the difficulty on this route comes from route-finding rather than the moves. I spent a long while on pitch two debating with myself where I was supposed to go. I eventually figured it out though. 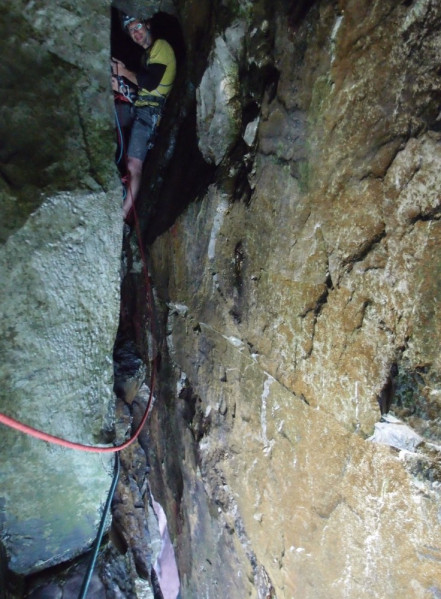 The holds are probably permanently wet – at least they were when we did it – but they’re big enough that this doesn’t matter too much. We initially attempted a headtorch-free ascent but gave up on that idea pretty quickly! 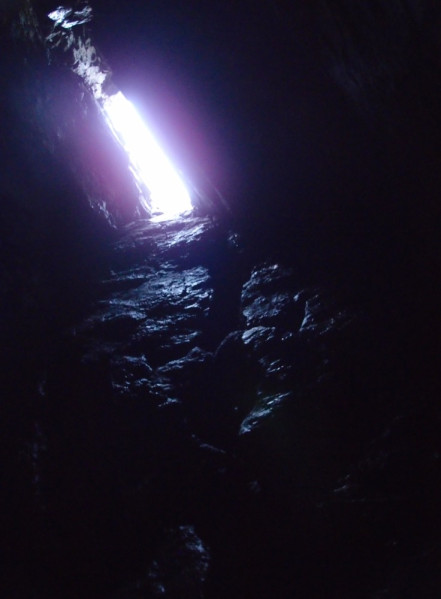 Pitch 3, up into the light! 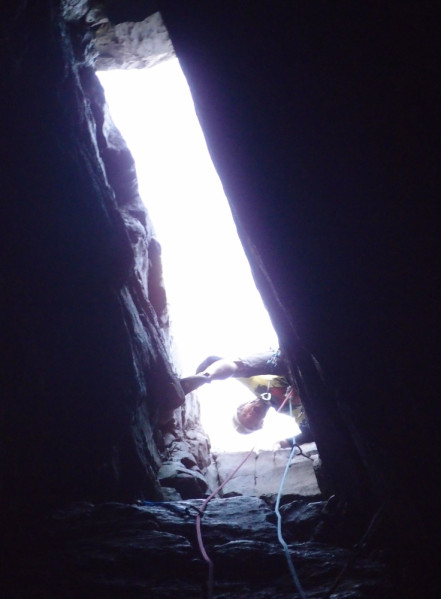 It was great to get back into a bit of trad climbing, and it was my first time in Pembroke. I was suitably impressed and will be returning!